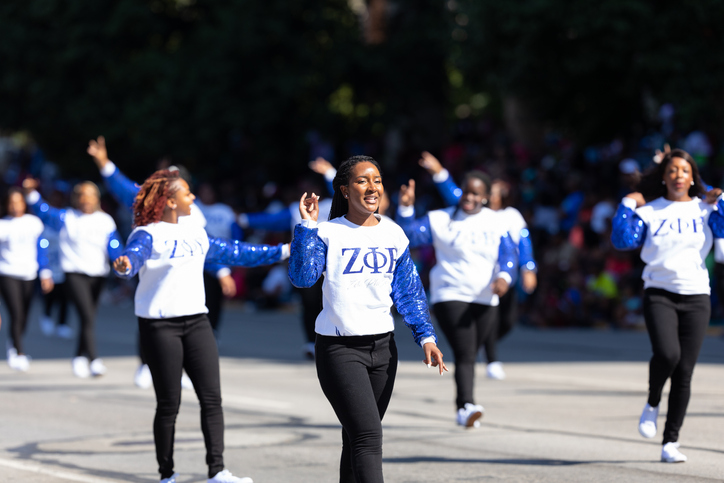 There is nothing more special than having something to hold from your sorority. Anyone who has been a part of a sorority while in college knows just how special the feeling is to belong to a sorority.


You create friendships that last a lifetime, and the closeness that you build through your experience in Greek life can go beyond borders as well. Spending time with your sorority mates can be a very rewarding experience as you start your journey in college.


There are many famous Greek sororities around the colleges in the US, but perhaps none as famous as the Zeta Phi Beta. Over the years, there have been many famous Zeta Phi Beta members spread all over the world. Let us take a look at some of the top members of Zeta Phi Beta and how they have ensured that their sorority's name keeps shining brightly everywhere.


Grammy Award nominee R&B singer Syleena Johnson is a proud Zeta sister. She is a singer-songwriter, television presenter, and actress. She was nominated twice for the Grammies. Once in 2005, she was nominated for the Best Rap/Sung Collaboration for the song "All Falls," and then in 2014, she received the nomination for Best R&B album for her R&B Divas.


Another famous Zeta sister is Dr. Elizabeth Koontz, a renowned educator. Dr. Koontz is a massive success story in the world of education. She dedicated her whole career to actively advocating for equal rights and opportunities for women, African-Americans, and the poor working class.


This multi-talented singer and a former Goodwill Ambassador to the UN's Food and Agriculture Organization is a famous Zeta woman. Throughout her career, she sold over 100 million records worldwide. She has won a whopping six Grammy Awards and has also been inducted into the Grammy Hall of Fame, the Hollywood Walk of Fame, the R&B Music Hall of Fame, as well as the Apollo Theater Walk of Fame. Three of her songs have also been included in the Grammy Hall of Fame.


Who doesn't know the famous comedian, actress, and television host Sheryl Underwood? But you might not know that she is a proud sister of the Zeta Phi Beta sorority. She made a name for herself after becoming the first female finalist in Miller Lite Comedy Search in 1989. Since September 2011, Underwood has been one of the hosts of The Talk, a CBS Daytime talk show.


A famous Zeta Phi Beta sister, Zora Neale Hurston, was an American author, filmmaker, and anthropologist who was known for her portrayal of the racial struggles in the early 1900s. She was famous for being a folklorist, and Harlem Renaissance writer who wrote the famous Their Eyes Were Watching God and Moses, Man of the Mountain. In her lifetime, she wrote over 50 short stories, essays, and plays.


A sister of the Zeta Phi Beta sorority, Autherine Lucy Foster is famous for being the first black student to ever attend the University of Alabama in 1956. This gutsy Zeta Phi sister was an activist, and there is a clock tower dedicated to her on the campus of the University of Alabama. The tower is called the Autherine Lucy Clock Tower and represents her struggle against all the hatred she encountered when she first entered the university.


Camille Kaye Cooper belonged to the Epsilon Kappa Chapter of Zeta Phi Beta and was the first-round pick for the 2001 Women's NBA draft for Los Angeles Sparks. This proud member of the sorority went on to play for the New York Liberty in 2001 and 2002.


A sister of Zeta Phi Beta, Esther Rolle is most famous and recognized for her role in the television show Good Times, where she played the role of Florida Evans. She initially played this role for the CBS sitcom Maude, which was later spun off into Good Times. Rolle was even nominated for a Golden Globe Award for Best Actress - Television Series Musical or Comedy in 1976.


As we age, we tend to let go of some of these memories and end up losing our sorority outfits. How cool would it be if there was a way to get back your shirts, jackets, hoodies, umbrellas, or any other accessories that belonged to your sorority? Now with the Greek Dynasty, you have a real chance of owning back a piece of your college life.


If you belong to Zeta Phi Beta, then head over to Greek Dynasty’s online store and relive your memories by ordering Different apparel and accessories belonging to your famous sorority. And even if you didn't belong to this sorority, you can always help yourself to one of the items from this favorite sorority as a tribute to the many famous Zeta Phi Beta members and the path-breaking work they have done in various fields.